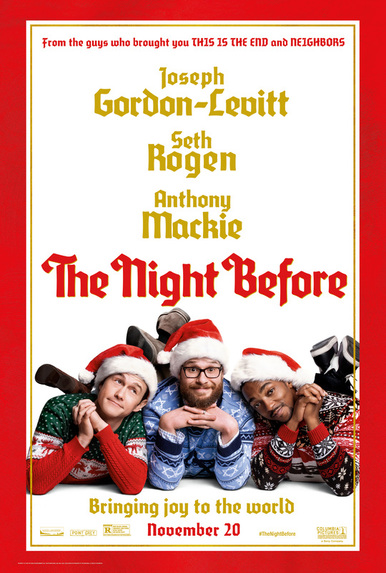 Nostalgia for thirty-somethings appears to be gaining a foothold in Hollywood's creative sector.  Earlier this year, Pixels reminded of us of spending all of our quarters in the arcade on push button first-generation video games.  Now, The Night Before cobbles together three gentlemen in their mid-30s realizing they are too busy with family and life to hang out with their friends and sets them on a funny, predictable, and absolutely filthy last hurrah.  Reminiscent of the recent A Very Harold & Kumar 3D Christmas and most other ‘it all happens in one night’ narratives, The Night Before fails to break any new ground in the comedic sub-genre glorifying the lewd, crude, and disgusting, but for those of us who like to see completely offensive material every now and again, the film checks that box.

Director and co-writer Jonathan Levine (Warm Bodies, 50/50) claims the story’s foundation is autobiographical.  He would go with friends sporting ugly Christmas sweaters to karaoke joints, Chinese restaurants, and check in with his old high school drug dealer during the holidays.  This is the same tradition Ethan (Joseph Gordon-Levitt, Sin City: A Dame to Kill For), Isaac (Seth Rogen, Steve Jobs), and Chris (Anthony Mackie, Ant-Man) enjoy every Christmas Eve.  In 2015, however, Isaac and Chris are ready to end the annual debauchery because they are on the verge of fatherhood and fame respectively.  Ethan remains stuck and either unable or unwilling to advance both in his personal and professional situations.

Other than this Christmas Eve being the group’s last karaoke and bar-hopping extravaganza, this time around is also the most important because the fellas come into possession of something they have been searching for since the beginning, tickets to New York City’s most exclusive and premier party, The Nutcracka Ball.  Hosting all the drinks and drugs your body may consume, The Nutcracka Ball caters to the sports and entertainment elite, a bar too high for our three protagonists.  After Ethan’s sticky fingers procure the hard to get tickets, the idea and successful execution of The Nutcracka Ball shuttles the plot safely forward.

Speaking of drugs, there are narcotics aplenty.  Isaac’s very pregnant wife (Jillian Bell, Inherent Vice) gifts him with a grab-bag full of uppers and downers, an assortment which would make Hunter S. Thompson do a double take.  Isaac has been out of the casual drug intake business for a while because he unwisely chases some potent mushrooms with a vial of coke, some ecstasy, and a continuous flow of booze, hoping they will all counteract one another.  While tripping in the bathroom, he records a cell phone video regarding his doubts about fatherhood and what should happen with the fetus that may become a cult classic segment for the next generation of thirty-somethings.

The drugs are also the reason for most of the memorable gags including cocaine nose blood spicing a cocktail and emptying the contents of one’s stomach in the middle of midnight mass while declaring the innocence of the Jews in the murder of Jesus Christ.  These shenanigans are not the most egregious things I’ve seen in blue comedies but they at least come in on par with their predecessors.  Other over-the-top episodes include graphic public restroom sex, in-depth discussion of and shots of penis photos, and Isaac accidentally recreating the crucifixion of the ‘Messiah’.

Not everything hits its mark.  Chris has an out of place, extended chase scene with a woman determined to be a Christmas Grinch acting out well known holiday villains including Die Hard’s Hans Gruber and Home Alone’s Sticky Bandits.  Ethan has a few run-ins with his ex-girlfriend (Lizzy Caplan) that doesn’t add up to much and Isaac’s full on slide into drugged-up oblivion starts to get on our nerves.  The more enjoyable supporting characters are Mindy Kaling (Inside Out) who unfortunately imbibes a unique cocktail, Tracy Morgan (Top Five) as the opening rhyming narrator, and a morose, reflective Michael Shannon (Freeheld) who may be more than he appears.

I laughed hysterically at some of the craziness on screen, but the all too familiar character arcs and sudden realizations on how to get their respective lives back on track is stale and mostly endured.  Paraphrasing one of the taglines, the night where three boys become three wise men, is the same old comedy crutch we’ve seen in countless ‘solve all your problems’ in one crazy day/night experience.  While my age group will recognize the fascination with Nintendo 64’s Goldeneye and the audacity of playing Kanye’s ‘Runaway’ on the F.A.O. Schwarz foot keyboard, I do not believe too many other age groups will relish and take away any lingering memories from The Night Before.  There are a couple cameos from very famous people sprinkled throughout but we’re here for the three guys and their party.  It turns out the big bang was mostly hype.
Comment Box is loading comments...