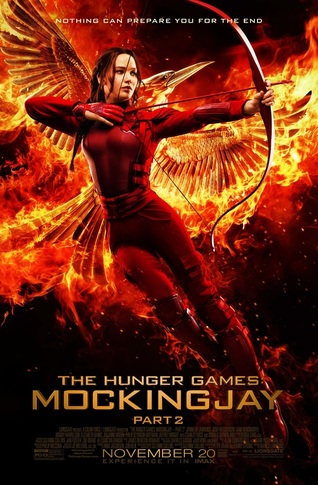 Look above the Jennifer Lawrence icon on the movie poster of The Hunger Games: Mockingjay – Part 2 and you will read the tagline, “Nothing can prepare you for the end.”  Trust me, I am prepared.  The two superfluous hours of last year’s Part 1 prepared us all to watch something, anything, other than the empty nothing of that previous film.  Harry Potter got away with breaking its last act into two parts because it had the material to cover its bases.  Twilight did the same thing, much to my chagrin, but if you’re a Twilight fan, maybe it worked for you.  Mockingjay lacks the heft to warrant a two-film conclusion.  Part 1 would have made a fine five-minute prologue to this film and nothing would be lost.

Just in time to wake up the audience from our first half hour nap and gently allowing us to wipe the drool off our chins, Part 2 finally gets to some action.  Katniss Everdeen (Jennifer Lawrence) looks at her skinhead friend Johanna (Jena Malone, Inherent Vice) and declares she is going to personally infiltrate the Capitol and assassinate President Snow (Donald Sutherland).  Mimicking the audience, Johanna cracks a smile and nonverbally shows everything we’re feeling; it’s about damn time her face says.  Johanna also gets the film’s best and most revealing line when she references Katniss’s “…whole tacky romance drama” situation. 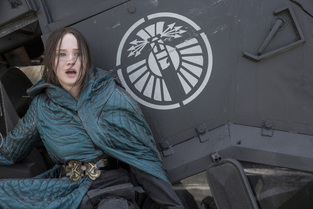 That is pretty much the last we see of Johanna for the next 90 minutes, of course the filmmakers leave out the most badass fighter of them all, but it is nowhere near the last of the aforementioned tacky romance drama.  Two men continue to make fools of themselves trying to prove they alone love Katniss the most.  Gael (Liam Hemsworth) is the brawn to Peeta’s (Josh Hutcherson) brain.  Peeta’s brain, by the way, is mentally sawed in half due to the most severe case of PTSD ever filmed.  Even though he tries to murder Katniss every chance he gets, deep down, he still loves her.

The 11 year-old I saw Part 2 with (Hi Jayde) said all of her friends like Gael better than Peeta and who can blame them?  Peeta may be the gentleman who cherishes Katniss’s well-being the most, and the guy who would make a much better impression in front of a lady’s parents, but he is a certified wet mop.  Even though he stares daggers at Katniss and must repeat his own name and situation to be sure anything is real, Peeta is shoved into Katniss’s covert assassination squad because nothing screams secrecy and mission focus than a teammate who wants to rip your head off. 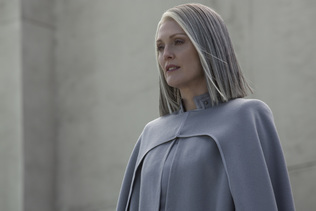 Peeta’s presence is actually political.  President Coin (Julianne Moore, Freeheld), the rebel leader, is disconcertingly showing signs of tyranny just like the President Katniss is already trying to overthrow.  Is there nobody in the whole wide world of Panem capable of leading without veering over into autocracy?  Yet, the political realm is exactly why Part 2 is not entirely a lost cause.  Katniss witnesses first-hand war’s innocent collateral damage and suffering civilians because of government corruption and civil war.

Echoing current events, Part 2’s most gut-wrenching scene shows a very young child survive incoming artillery fire while her mother does not.  Katniss can only stare as the new orphan screams, “Mommy!” over and over while the rest of the refugees dive for cover.  Immediately afterwards is an even more gruesome scene with an entire day care amount of children deliberately torn to shreds with what looks like cluster munitions.  I had no idea director Francis Lawrence had it in him to finally leave the shallow end of the pool and dip his foot in more relevant territory. 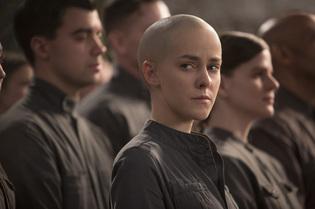 Mockingjay Part 2 is a rollercoaster of severe downs punctuated by brief crests.  In one scene, we have Katniss kissing Gael who responds with perhaps the worst line of dialogue this century, “Kissing you is like kissing a drunk person, it doesn’t count.”  Liam Hemsworth must be the greatest actor alive for he said that line with a straight face.  On the other side, there is an action scene in what looks like a sewer tunnel where shrieking albino super-fighting things just about annihilate Katniss’s entire squad.  Folks are saying Part 2 is a non-stop thrill ride where the action never lets up.  That description is an outright lie, but this sewer scene is a sparkly diamond in the rough.  Most of all, I am relived there are no more Hunger Games films on the horizon, that is, until none of us are shocked by the announcement of a prequel.  The decision-makers extended the franchise one film too many and made me cringe more than appreciate what could have been a cut above its many YA peers.  So long Katniss.
Comment Box is loading comments...